Pan-European Transport Corridor No. 8 is one of the ten pan-European transport corridors connecting the Adriatic Sea to the Black Sea through Albania, the former Yugoslav Republic of Macedonia and Bulgaria. Along with corridors № 4, № 7 and № 9, it is one of the four main European corridors passing through the territory of Bulgaria.

The Corridor VIII is one of the Pan-European corridors. It runs between Durrës in Albania, at the Adriatic coast, and Varna, at the Bulgarian Black Sea coast. The corridor follows the route: Tirana/Durrës/Vlore – Elbasan – Skopje – Pernik – Sofia – Plovdiv – Burgas – Varna.

The construction of the Tirana – Pristina motorway and the construction of the Pristina – Skopje motorway outrun the development of this planned pan – European corridor, which seriously shifted its western destination to Dalmatia for its possible connection to A1 Motorway (Croatia) via Montenegro through the planned Adriatic-Ionian highway.

The Albanian government has set as its main goal of building the so-called and famous Albanian road between Tirana and Debar, which will shorten the trip between the Albanian capital, Skopje and Sofia – for nearly three hours.

The Republic of Albania has built a railroad line from Vlora to Pogradec.

The Rila highway is also part of this pan-European corridor, even though it surrounds Sofia.

The corridor is intermodal and includes ports, roads, railways, airports, combined and intermodal transport infrastructures – the auxiliary facilities needed to manage traffic along the route.

The total length of Pan-European Transport Corridor 8 is between 1220 and 1350 km, depending on the specific features of its road and rail routes. 631 km of roads and 747 km of built railway pass through Bulgaria. About 52% of the road infrastructure and over 55% of the railway infrastructure of the corridor are on Bulgarian territory. They are built and are in operation. The only Bulgarian section along the corridor that is not built is the railway line from Gyueshevo Station to the Bulgarian-Macedonian border, with a length of about 2.5 km.

The shortest distance (approx. 750 km) between the Adriatic and the Black Sea along the transport corridor will be between the city of Drac and Bourgas along a highway via the so-called Albanian road. The distance can be taken within a day. 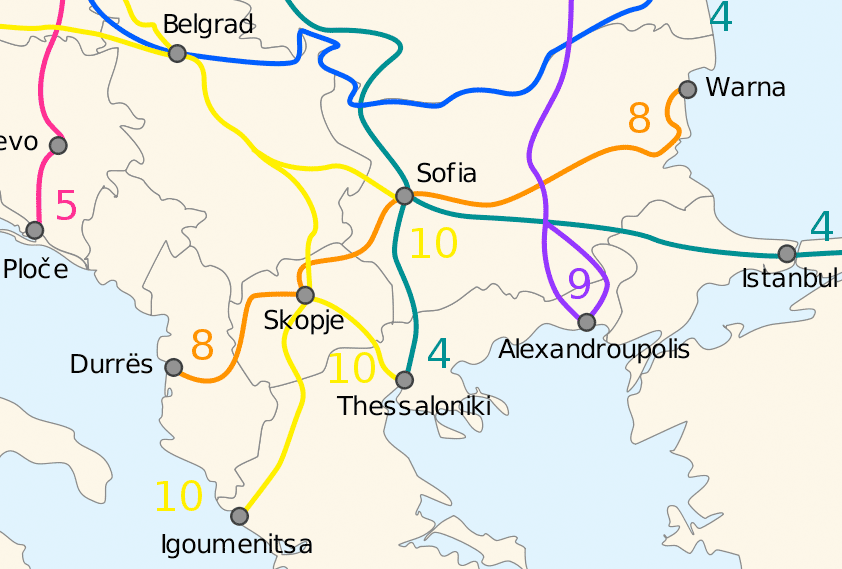